Things To See And Do in Great Malvern

We are a short walk from The Malvern Festival Theatre, Priory Park, the shops, restaurants and bars as well as the footpaths to the hills.

Sidney House stands opposite a main route up to the Hills which makes it ideal for people coming to enjoy the miles of excellent walking. The hills are renowned as providing some of the greatest walks in the UK with beautiful scenery all the way up. We offer a map loan, picnic lunch and clothes drying service. The Malvern Hills are formed of some of the most ancient stone in the world around 680 million years old and have remained unspoilt for hundreds of years. The idyllic views and countryside are inspiration to artists, writers and walkers alike.

At the top you are rewarded with ‘one of the godliest views in England’ as the poet William Langland in the 14th Century put it and they remain breathtaking to this day. We offer a maps and picnic lunches.

Winner of Best Pub In England ‘The Nag’s Head’ is a five minute walk away and the numerous bars and restaurants of Great Malvern Town are on our doorstep. We are happy to make recommendations and bookings for you. Please see our list of recommended restaurants on our Where To Eat page.

Local attractions include the Three Counties Show, the Three Choirs Festival held at Worcester, Hereford or Gloucester in September and the famous Malvern Festival associated with Shaw and Elgar whose birthplace is near Malvern.

Malvern is a convenient centre for touring the Cotswolds, Shakespeare’s Country, the Wye Valley and the Welsh Borderland.

Our Favourites In More Detail:

There are countless walks in and around Malvern. One of the nearest, and our favourite because it involves cake and a sit down, is the walk up St Anne’s Road which takes you along Iron Age tracks to St.Anne’s café and well. Here you can drink from the spring, have a cup of tea then continue on further up the hills if you want. 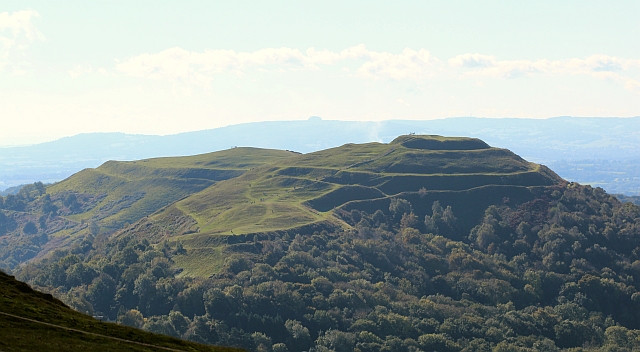 The highest point on the Hills is the Worcestershire Beacon (425m) with North Hill (397m) and the British Camp Hill (Herefordshire Beacon – 338m) the other highest points. In total there are some 20 named hills comprising the complete range. The entire length of the Hills are open to the public and are crisscrossed with about 160km (100 miles) of bridleways and footpaths. Dogs are allowed on the hills and can be let off lead so long as they are well behaved. Cycling is allowed on bridleways only.

One of our favourite walks is up British Camp, which dates back to the iron age and provides superb views in all directions. In 500 BC the ancient Britons fortified it using only hand tools then later it was occupied by the Normans who built a watch tower on the top.

There are 88 springs and wells, the most famous are Beauchamp Spout in Cowleigh Road and the Malvhina at Belle Vue Island in the town centre. Queen Victoria refused to travel without her fresh supply of Malvern water and Malvern Water remained the Royal families first choice until Schweppes closed the factory down in 2010.

The water is still being bottled from the same Holywell Spring and sold as ‘Holywell Malvern Spring Water’ by a local company and is ‘Famous for containing nothing at all’.

The Malvern Theatres host many major stage productions on the way to London and is situated in the pretty Victorian Winter Gardens. There is also a cinema in the theatre complex which has screenings every day and The Forum Theatre hosts a wide variety of concerts.

A less well known park in central Malvern is

Rose Bank Gardens which rise up beside the Mount Pleasant Hotel and can be found under the ‘Buzzards’ sculpture. This a wonderful tiered park with twisting paths and magnificent views. The infamous ’99 steps’ can be found here which lead directly onto the ridge of the hills.

The Morgan Motor Car factory brings many visitors from around the world and we highly recommend a visit. It was opened in 1910 by Henry Morgan and remains in the Morgan family to this day. The visitor centre and museum feature exhibits about the company’s history from Edwardian times until the present day, developments in automobile technology, and a display of automobiles. There are also guided tours of the factory.

Great Malvern station was opened by the Worcester & Hereford Railway in 1860 and the present buildings by architect Edmund Wallace Elmslie were completed in 1862. It was later absorbed by the Great Western Railway.

Lady Emily Foley was a key sponsor of the building of Great Malvern station. She had a waiting room made for her exclusive use at Great Malvern Station, which is now ‘Lady Foley’s Tea Room’, where she would wait for her train.

At the end of Platform 2 is the entrance to the Worm, an enclosed passageway which leads under Avenue Road into the former Imperial Hotel (now Malvern St James). It formed a private pedestrian access and is believed to be the only structure of its kind in the country. Although in need of extensive restoration and generally not open to the public, the Worm is itself Grade II listed.

The Malvern Museum is a little gem full of fascinating artifacts and gives an in depth look at Malvern’s rich history and at £2 entry it is very reasonable. The museum is situated in the Priory Gatehouse. Don’t forget to say hello to the monk as you walk in.

Locally referred to as the Abbey Gateway, it was built around 1430 and is the second oldest building in Malvern after the Norman priory church. The gatehouse is the only remaining building of the 12th century Benedictine monastery that was dismantled in 1539 during the Dissolution of the Monasteries by King Henry VIII of England.

The Priory was a Benedictine monastery c.1075-1540 and is now an Anglican parish church.

It has the largest display of 15th century stained glass in England, as well as carved miserichords from the 15th and 16th century and the largest collection of Medieval floor and wall tiles. In 1860 major restoration work was carried out by Sir George Gilbert Scott.

The Priory takes pride of place in Malvern’s large conservation area and is situated in the middle of town making it easy to pop in and have a look around.

The Elgar Birthplace Museum is in Lower Broadheath, Worcestershire. It is a museum dedicated to the English composer Edward Elgar. Elgar was born here on 2 June 1857, and lived here until his family moved to Worcester two years later. The museum comprises the Birthplace Cottage and its delightful garden, and the modern Elgar Centre, opened in 2000, which houses further exhibitions and a function room.

The Museum displays give a fascinating insight into Elgar the man and social history as well as an opportunity to see original music manuscripts. In addition to autograph music manuscripts, the Museum collection includes around 11,000 letters from and to Elgar, his friends and family; proofs, programmes and other items connected with Elgar’s music; family photographs and scrapbooks; items connected with his travels and with his hobbies including golf and cycling; personal possessions, awards and honours, and film of his later years. The cottage was established as a museum in 1934, on Elgar’s death, by his daughter Carice Elgar Blake.

Croome Court is a mid 18th century neo-Palladian mansion surrounded by extensive landscaped parkland at Croome D’Abitot, near Pershore in south Worcestershire.  The mansion and park were designed by Lancelot “Capability” Brown for the 6th Earl of Coventry, and were Brown’s first landscape design and first major architectural project. Some of the mansion’s rooms were designed by Robert Adam.

Set in the heart of historic Worcester, Greyfriars’ is a stunning timber-framed merchant’s house where you can get away from the hustle and bustle. This unique house and garden was rescued from demolition and recreated into a peaceful oasis.

Worcester Cathedral, before the English Reformation known as Worcester Priory, is an Anglican cathedral in Worcester, situated on a bank overlooking the River Severn. It is the seat of the Bishop of Worcester. Its official name is The Cathedral Church of Christ and the Blessed Mary the Virgin of Worcester. Built between 1084 and 1504, Worcester Cathedral represents every style of English architecture from Norman to Perpendicular Gothic. It is famous for its Norman crypt and unique chapter house, its unusual Transitional Gothic bays, its fine woodwork and its “exquisite” central tower, which is of particularly fine proportions.

The cathedral’s west facade along with a portrait of Sir Edward Elgar, appeared on the £20 note that was issued by the Bank of England between 1999 and 2007.

Berrington Hall is a country house located about 3 miles (4.8 km) north of Leominster, Herefordshire.  During the 20th century it was the seat of the Cawley family.

It is a neoclassical country house building which was designed by Henry Holland in 1778-81 for Thomas Harley. It has a somewhat austere exterior, but the interiors are subtle and delicate. Berrington Hall is home to the Elmar Digby furniture collection, paintings by, amongst others, Thomas Luny (1759–1837) and the Charles Paget Wade costume collection from Snowshill which can be viewed by appointment. The ‘below stairs’ areas and servants’ quarters which are open to the public include a Victorian laundry and Georgian dairy. Berrington has been in the care of the National Trust since 1957 and is, along with its gardens, open to the public.

Berrington features Capability Brown’s last landscape design. A notable feature is the ha-ha wall which was the subject of extensive renovation in the late 20th century by local craftsmen. Berrington Pool, the lake and the island are sites of Special Scientific Interest.

Hellen’s Manor, also known as Hellen’s House or simply Hellen’s is located in the village of Much Marcle in Herefordshire. It is one of the oldest dwellings in England, primarily composed of Tudor, Jacobean, and Georgian architecture, but the foundations date from the 12th century, with some elements older still.  This beautiful historic house in  is a  monument to much of England’s history. It remains a living home, and not a museum, although it contains a wealth of period furnishings, artifacts, paintings and decorations.

Hampton Court is a castellated country house in Herefordshire. The house is located in the village of Hope under Dinmore, near Leominster and is a Grade I listed building. Hampton Court dates from 1427, when a Sir Rowland Lenthall built the original house on an estate which had been granted to him some years previously by King Henry IV on the occasion of his marriage to the king’s cousin Margaret Fitzalan, a daughter of the Earl of Arundel. Sir Rowland’s house was a quadrangular courtyard house, and despite numerous alterations over the centuries the house has retained this basic form.

The gardens are a particular feature, and include an organically managed kitchen garden, as well as a maze, a secret tunnel, Dutch garden, island pavilions and a 150-year-old wisteria arch.

Hampton Court has a twelve acre garden which was largely created by the Van Kampens and is open to the public throughout the summer months, and now offers special events such as outdoor theatre productions, concerts and family days out.